Is Common Core too hard for kindergarten?

Is Common Core too hard for kindergarten? 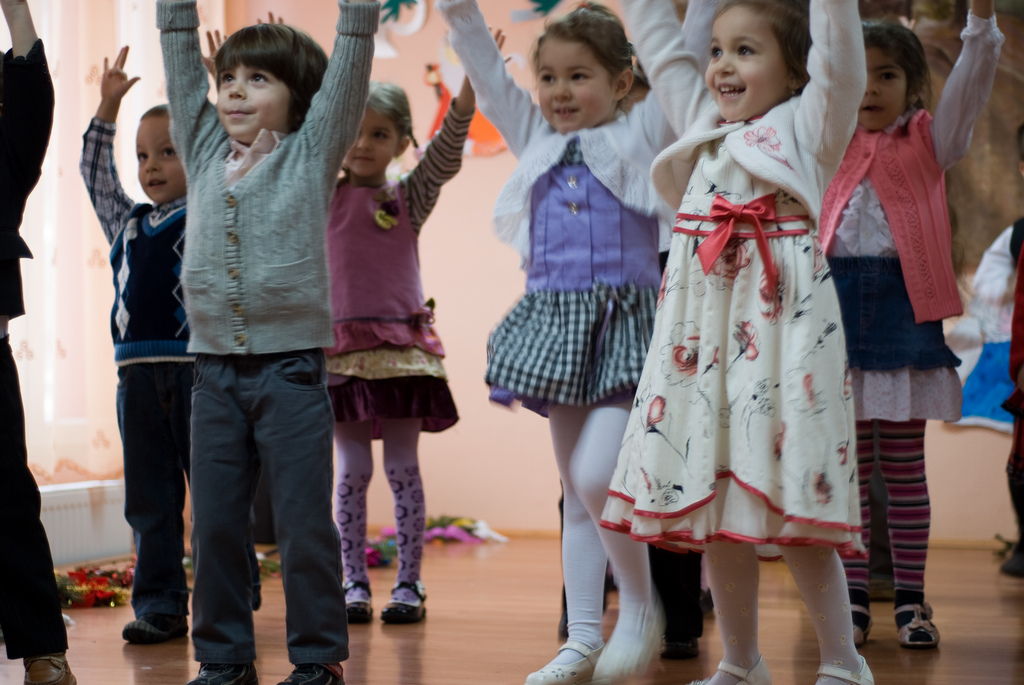 A report last month from a pair of advocacy organizations, the Alliance for Childhood and Defending the Early Years, argued that “there is a widespread belief that teaching children to read early will help them be better readers in the long-run,” but that there is “no scientific evidence that this is so.” The Washington Post and its Common Core-averse education blogger, Valerie Strauss, have been particularly aggressive in highlighting this report and running pieces from both parents and teachers arguing that “forcing some kids to read before they are ready could be harmful.”

The report, titled Reading in Kindergarten: Little to Gain and Much to Lose sounds an alarm over a perceived shift “from play-based, experiential approaches to more academic approaches” in early-childhood classrooms starting in the 1980s. “Under the Common Core State Standards (CCSS),” the authors claim, “the snowball has escalated into an avalanche which threatens to destroy appropriate and effective approaches to early education.”

The authors make much of the fact that no one involved with writing the standards was a K–3 teacher or early-childhood professional. The more important issue, however, isn’t who wrote it, but whether Common Core is beyond the abilities of five-year olds or the expectations we should have for them. The short answer, I think, is “no.” But let’s look at some of the report’s specific complaints.

The much-used phrase “developmentally appropriate” (or inappropriate) is not as scientifically clear-cut as many suppose. There’s little evidence to suggest that a child’s readiness to learn occurs in the discrete, stair-step phases that Piaget theorized about long ago. As the respected cognitive psychologist Dan Willingham points out, “children's cognition is fairly variable day to day, even when the same child tries the same task.” When Common Core critics say, “This is developmentally inappropriate,” however, what they usually seem to mean is, “This is too hard.” “Stage theory” is not a useful guide for setting standards or planning lessons. For teachers, the question is seldom “Is this developmentally appropriate?” The far better question is, “What do I want kids to learn?” and “How can I present this in a way that makes sense to small children?”

Common Core is too hard for kindergarten.

There’s no reason to think that Common Core’s literacy benchmarks are too hard for kindergarten. According to the National Center for Education Statistics, two out of three kindergarteners already recognize the letters of the alphabet, both in upper and lower cases, when they enter kindergarten—and that’s one of the “foundational skills” expected under Common Core. (Parents would surely be alarmed if, by the end of kindergarten, their kids did not know their ABCs.) A similar number (61 percent) come into kindergarten with two or more Common Core “print concepts” under their cognitive belts, such as knowing that English text is read from left to right and from the end of one line to the beginning of the next. Most of the individual kindergarten reading standards say that small children should be able to demonstrate skills such as answering questions or retelling key details about a story “with prompting and support.” When you ask your child a question such as “What do you think will happen next?” while reading out loud from Goodnight Moon or Make Way for Ducklings, that’s offering “prompting and support.” There’s no suggestion in Common Core that children should meet these standards as independent readers during or at the end of kindergarten.

No research documents long-term gains from learning to read in kindergarten.

This is deeply misleading at best and arguably false. One longitudinal study published in 1985 followed four thousand students from kindergarten to twelfth grade. One-third of them had been taught to read in kindergarten; the rest were not. The kindergarten readers were stronger readers as high school seniors—a finding that “held up across districts and schools, as well as ethnic, gender and social class groups.” That study’s authors declared that “[a]ny school district with a policy that does not support kindergarten reading should be ready to present new and compelling reasons to explain why not.” To be clear, this was a correlational study—there were (for obvious reasons) no students randomly assigned to a control group and denied kindergarten literacy instruction. But the overwhelming weight of such correlational studies builds a compelling case in favor of early reading instruction.

Indeed, the strongest argument in favor of reading by the end of kindergarten and Common Core’s vision for early literacy is simply to ensure that children—especially the disadvantaged among them—don’t get sucked into the vortex of academic distress associated with early reading failure. Here the data are clear, unambiguous, and deeply sobering. Nearly 90 percent of struggling first graders are still struggling in fourth grade; three out of four struggling third-grade readers are still struggling in ninth grade; and one in six children who are not reading proficiently in third grade do not graduate from high school on time—a rate four times greater than for proficient readers.

Nothing in Common Core—not one blessed thing—precludes schools and teachers from creating safe, warm, nurturing classrooms that are play-based, engaging, and cognitively enriching. If teachers are turning their kindergarten classrooms into joyless grinding mills and claiming they are forced to do so under Common Core (as the report’s authors allege), something has clearly gone wrong. Common Core demands no such thing, and research as well as good sense supports exposing children to early reading concepts through games and songs. The authors of Little to Gain would do early-childhood education a considerable service if instead they pushed aggressively for teacher education and professional development that enabled more teachers to meet Common Core benchmarks with the teaching techniques they favor, not demand that we “withdraw kindergarten standards from the Common Core so that they can be rethought along developmental lines.” There’s simply no reason to do so. Tim Shanahan of the University of Illinois at Chicago, who helped write the standards and chaired a federal review panel that examined the research undergirding them, noted emphatically that “[t]here are not now, and there never have been data showing any damage to kids from early language or literacy learning.”

This is simply incorrect. The standards describe a range of skills that children are expected to demonstrate by the end of kindergarten. They are silent on the instructional methods that schools and teachers employ to meet those benchmarks. I had the opportunity to participate in a thoughtful, hour-long discussion of the report with Nancy Carlsson-Paige, one of the report’s authors, on KQED’s program Forum last month. But the star of the segment was Colleen Rau, a reading intervention specialist in the Oakland school district. While she shared some of Carlsson-Paige’s concerns around implementation pressures (mine too), she was quick to note that when she taught kindergarten eight years ago, “there was this same expectation around students learning all of their letters, sounds, and sight words and beginning to read early emergent text. That expectation,” she pointed out, “has been around far longer than Common Core.”

Here the authors of the report come dangerously close to substituting philosophy for evidence and sound practice. We’ve all heard and read stories from friends and others about the kid who didn’t read until “something clicked” and she was off and running. As seductive as these anecdotes are, that is all they are—anecdotes. There’s no empirical support for the idea that reading develops naturally; “late bloomers” are rare. If the report’s message is that children should not be reading by the end of kindergarten, or that they will read when they’re darned good and ready, it’s perilously close to reckless. Most kids can already read simple texts by the end of kindergarten. And those who struggle early tend to continue to struggle—both in school and in life. The authors are absolutely correct that telling stories, reading from picture books, singing songs, reciting poems, activity centers, and imaginative play all help build literacy skills. That’s why none of those are discouraged by Common Core.

Of more than ninety specific Common Core kindergarten standards in literacy and math, the report takes issue with exactly one, which says that kindergarteners should be able to “[r]ead emergent-reader texts with purpose and understanding.” We’re not talking about six-year olds reading Proust or Of Mice and Men. Keep in mind, too, that it’s the end of kindergarten that particular standard applies to. Common Core defines emergent-reader texts as “consisting of short sentences comprised of learned sight words and CVC [consonant vowel consonant] words.” Think “I am Sam and I am an ant,” not “To him who in the love of Nature holds communion with her visible forms.” There is nothing “developmentally inappropriate” about this standard, which many children—perhaps most—already meet. Our concern should be with those who don’t meet this standard, but can and should be put on a path to reading readiness before they fall forever behind.

In the final analysis, I share Carlsson-Paige’s concern about turning kindergarten into an academic pressure cooker. No one wants that; it is a recipe for disengagement and failure. But it’s simply incorrect to suggest that we can’t have both play-based kindergarten and language-rich kindergarten. It’s what the best kindergarten teachers have always done. Where Carlsson-Paige loses me, however, and where “Little to Gain” strikes me as not just wrong and misleading but nearly reckless, is in its suggestion that reading short “emergent text” sentences by the end of kindergarten is potentially harmful. This is clearly not the case.

The clear thrust of Common Core in kindergarten is to ensure that kids enter first grade ready for success—recognizing letters, understanding the sounds they represent, and knowing that words are collections of these letter-sized sounds. All of this is in the service of helping children understand how print represents language. That’s what kindergarten literacy looks like under Common Core. Given how early the trajectory is set, it should make us very, very nervous to suggest that kindergarten reading is too much, too soon.

PCSD, all schools meet or exceed expectations in state rankings